This is an incomplete listing of the equipment used by the L'Amoreaux CI Stage Crew. Someone email me at tonytash+wiki@pm.me if this list changes and I'll update it. 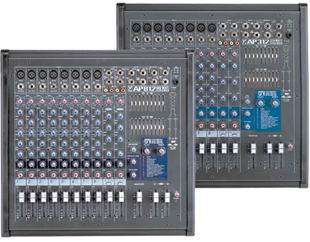 The bigger mixer used during events such as school play and talent show.

This is the more common mixer that lives in the sound cart. It is from a Stagepas Mixer/Speaker combo kit. It has 4x XLR inputs, and 2x stereo TRS/RCS inputs.

These are our main wired workhorse mics. They are used at most assemblies. I personally quite like the usability and sound signature of these. I suppose they are an SM58 competitor.

Though I don't quite have a model number, this is one that was previously broken that we had in a drawer. I 'fixed' it with some tape and aluminum foil on the battery contacts and it worked better then our other mics. As opposed to the other wireless mics, the main advantage was much better sound. It also used VHF so there is a non zero change it's not allowed under newer FCC rules. IDK we're in Canada though…

Another mic we found with the Sennheiser. This is a headset type, it also has a bigger receiver. It's one of the much older mic packs with analog channel switches. This definitely uses older VHF spectrum. oops.

These smaller speakers were what we used for most assemblies. With the exception of the shows, where I usually deployed them as monitor speakers, we used them as the main “FOH” speakers despite being behind the audience in the market square. Side note: Speakers in the back facing forward means bonus feedback.

These are the bigger speakers we used for shows. They are also passive and need an amp to drive them.

lamoreaux/stagecrew/equipment.txt · Last modified: 2021-05-01 03:25 by tony
Except where otherwise noted, content on this wiki is licensed under the following license: GNU Free Documentation License 1.3